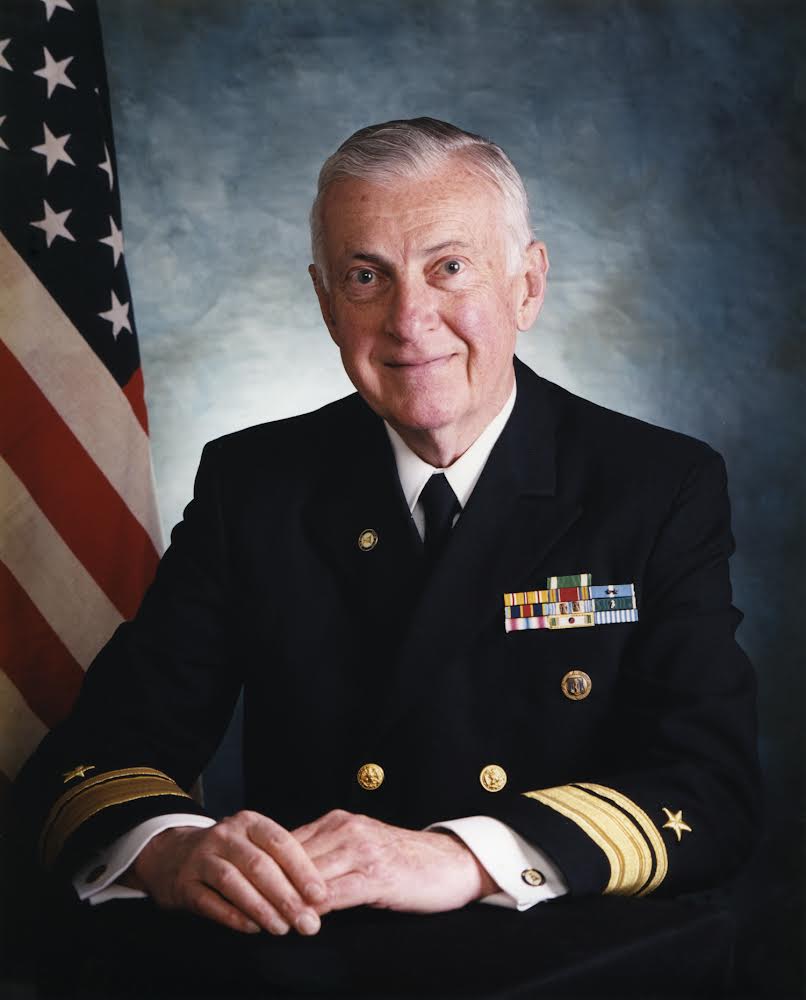 J. Robert Lunney died peacefully surrounded by his wife and son on Thursday March 10th at the age of 94.  He was born on 15 December 1927 in New York City. Bob was admired by all that knew him for his commitment to family, his humor, passion for history, and dedication to the many organizations he was a member of.

Enlisting in the Navy at 17, during World War ll, he served with the Naval Amphibious Forces, Pacific (Marshall Islands and Mariana Islands) 1945-46. During the Korean War he served in Korea, 1950-1951, with the Military Sea Transportation Service as a staff officer (Inchon Landing; Hungnam Evacuation). His awards include the Navy Combat Action Ribbon, Merchant Marine Gallant Ship Citation and the Korean Presidential Unit Citation. His Gallant Ship Citation commends Admiral Lunney for his courage and resourcefulness in participating in “one of the greatest marine rescues in the history of the world” at Hungnam, North Korea during December 1950. The Guinness Book of World Records cites this wartime action as, “The greatest rescue operation ever by a single ship by evacuating 14,000 refugees” threatened with annihilation.

He was awarded a Bachelor of Arts degree (1950) from Alfred University, Alfred, N.Y. and a Doctor of Law degree (1954) from Cornell Law School, Ithaca, N.Y. He served five years with the Department of Justice as an Assistant U.S. Attorney, SDNY (1955-1959) and later spent nine years with Shearman & Sterling. On Aug. 14, 1963 The New York Times reported on its first page that he was the first northern lawyer to provide legal assistance to voter registration drives in Mississippi. He later founded his own firm specializing in litigation.

By appointment of the Secretary of the Navy he served a three-year term on the National Naval Reserve Policy Board. He retired from the Navy Reserve as a Captain in 1987, having completed 43 years service, at which time the Governor of N.Y. promoted him to Rear Admiral in the New York Naval Militia.

In 1994 the Secretary of the Navy decorated Admiral Lunney with the Navy Distinguished Public Service Award for outstanding service, the highest form of public service recognition bestowed by the Navy. In 1997 and 1998 Admiral Lunney, having been designated by the Department of Defense, observed joint operations by American and North Korean military personnel in North Korea recovering American war dead and conferred with the North Korean Ministry of Foreign Affairs on POW/MIA issues.

Admiral Lunney was awarded the Order of the Croatian Trefoil by the President of Croatia in 2007 for his determined efforts in finding the next of kin of Peter Tomich.  Tomich, born in Croatia, had been awarded the Medal of Honor for sacrificing his life to save his men during the attack on Pearl Harbor and his family had never been found.

In 2006 he was awarded an Honorary Doctor of Politics by Woosuk University, Korea in recognition of his extraordinary humanitarian service during the Korean War.

Admiral Lunney was the past Natl. Pres. of the Association of the U.S. Navy. His other memberships include the Knights of Malta (American Assn.); Natl. Guard & Naval Militia Relief Society of  NY ( past Chairman); Sons of the Revolution (past Natl. Pres.); NY Council, Navy League of U.S. (past Pres.); Naval Order of the U.S. (past Commander, NY Commandery); Knights Templar (past UN Representative); The Chosin Few, Inc. (past Natl. Director); U.S. Naval Service Personnel Educational Assistance Fund, Inc. (Bd. Directors); Knights Templar (past U.N. Representative); Lavelle School for the Blind (Bd. Trustees) and Lavelle Fund for the Blind (Bd. Directors.)

He was a private pilot, scuba diver, skier and a former sky-diver.

He will be missed greatly by his wife of 46 years, Joan, and their son Alex and his wife Melissa.