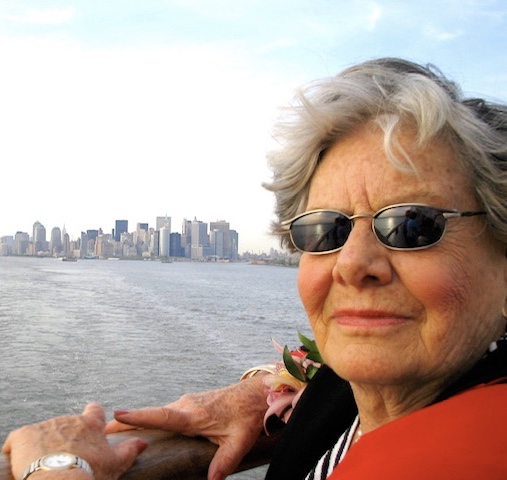 Audrey Grace O’Brien, 96, passed away peacefully with family present on Saturday, October 27th, 2018.  A New Year’s baby, born to Edith and Marshall Outwater, she was the middle of three daughters.  Born and raised in Riverdale, NY, she earned a scholarship to Hunter College High School in Manhattan and subsequently attended Hunter College. At the onset of WWII, Audrey was hired as the first female ticket sales agent of Grand Central Terminal.  There she met Gertrude Monaghan, her future sister-in-law, who introduced her to Robert E. O’Brien as he was leaving for Officer Training School.  They would meet at Grand Central ‘at the clock’ when Bob was home on leave, and Bob ultimately proposed marriage to Audrey at the top of the Vanderbilt staircase.  Upon Bob’s return from the war in Europe with the Third Army they were married in Bronxville, NY.  In 1952, The O’Briens moved to Briarcliff Manor, NY where Bob and Audrey raised their six children and lived for 50 years.  Audrey loved her Hudson River, travel, and golf.  She volunteered in the Briarcliff school system and Phelps Memorial Hospital.  She was an avid reader, thoroughly enjoying the daily newspaper with special attention to the sports section.  Audrey returned to work in Armonk, NY, for the Savin Corporation allowing her to splurge on a metallic blue convertible Ford Mustang which she drove for years.  In her later years, Audrey was lovingly cared for by the staff at Hancock Hall in Danbury, CT. Audrey is survived by her six children, Kathie (Phil) Nelson of New Fairfield, CT, Barbara O’Brien of Shelton, CT, Robert (Cathy) O’Brien of Salem, SC, Elizabeth (Robert) Hyland of White Plains, NY, John (Dale) O’Brien of Darien, CT, and Patrick (Susan) O’Brien of Bronxville, NY. Audrey was additionally blessed with 16 grandchildren and 10 great grandchildren.  Audrey was predeceased by her husband Bob in 1998, and her sisters Jane Young and Grace O’Hagan. Calling Hours at the Fred H. McGrath & Son Funeral Home, Bronxville between the hours of 9 to 10:30am on Friday December 21, 2018, followed by Mass of Christian Burial at St. Joseph’s Church, Bronxville at 10:45am.

Cancel reply
Previous Clark, Robert B.
Next O’Brien, Maureen A.