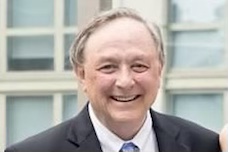 It is with great sadness that we announce the passing of Roger D. Mulvihill who died at the age of 85 on November 6, 2021. Born in Pittsburgh, Pennsylvania on June 28, 1936, to Dennis and Mary Mulvihill (nee Scheib), Roger spent the majority of his life in New York City, Bronxville, NY and Sag Harbor, NY, but he always kept a special place in his heart for the memories of his days playing baseball on the fields of Stanton Heights, PA. On trips back to Pittsburgh, Roger delighted in reenacting for his family highlights of his storied Little League and high school baseball career at each and every field he played on.

Roger left Pittsburgh in 1954 to attend Georgetown University. Little did he know at the time, but his experience at Georgetown would form a life-long love of all things Georgetown. While there he was a member of the baseball team, writer on the school newspaper, and part of the Reserve Officers’ Training Corps (“ROTC”). Anyone who knew Roger, knew that his love of the Georgetown Hoyas basketball team brought him so much happiness and much heartbreak. He was once spotted at the famous Tombs in Georgetown dancing on a table after a big Hoyas’ win. His great wish before he died was to see just one more great run by the Hoyas to the Final Four. Although he did not get to see it, he was beside himself with joy at the unexpected Hoyas Big East Championship win in 2021. Athletics would always be a major part of Roger’s life and baseball in particular would remain a constant presence. Roger played minor league baseball for the Baltimore Orioles organization, attended his beloved Yankees’ training camp, and loved watching his children and grandchildren play ball.

After graduating from Georgetown, he received his Juris Doctor from Yale Law School, LLM from NYU School of Law, and went on to serve in the United States Army. He earned numerous awards for sharp shooting and was a member of the Army Judge Advocate General’s Corps. It was in the Army where Roger picked up a tennis racket for the first time. He was immediately hooked. He would spend the next 50 years perfecting his strokes on the courts of the Bronxville Field Club, Meadow Club of Southampton and on his home court in Sag Harbor, New York. He loved competition and looked forward to his weekly games that often sounded more like battles than tennis matches when recounted by him. Along with tennis, Roger learned to ski as an adult. He took to it immediately. With his true determination on display, he could be found every winter searching for the perfect fall line.

Off the court and fields, Roger was an accomplished attorney. He loved being a lawyer. The more complex the matter the more interesting to him. Roger began his impressive legal career at Olwine, Connelly, Chase, O’Donnell, Weyher, where he made life-long friends. He joined Dechert LLP as a Partner in the Corporate and Securities Group. At Dechert, Roger started the Private Equity practice and was a member of the firm’s Policy Committee. He represented a wide variety of private equity fund sponsors and principals in fund formation matters. He authored numerous articles and lectured on creative financing and mergers and acquisitions. But perhaps what he was most proud of, was that he was the founder, Captain, and starting pitcher of the Dechert Softball Team for all his years at Dechert, pitching into his late 70s.

In 1970, Roger met his wife, Mary. They would go on to take the world by storm together for the next 50 years. Each supporting the other and creating a world for themselves that neither could have imagined. They raised a family that adored them, traveled the world, and challenged each other each day.

Roger loved to read and ponder the most challenging topics of our lives, he was a true intellectual, a talented athlete, and brilliant attorney, but most of all he was an incredible husband and father. He was an inspiration to his children with his quick wit, intelligence, and determination. Roger always made it clear that his family was most important. Nothing made him happier than to watch his children and grandchildren play the very sports he loved so much, talk to each of them about their interests and of course discuss religion and politics. He will be missed beyond words.

Roger is survived by his wife, Mary, his devoted children, Christopher of Manhattan, Kerry of Fairfield, CT and Suzy of Brooklyn, NY, his daughter-in-law, Kathleen, his sons-in-law, Greg and Henry, his six grandchildren who loved and adored him, Jack, Patrick, Ryan, Darby, Teddy and Lucy, his sister Denise Mulvihill, of Charleston, SC, and a band of in-laws, nieces, and nephews.

In lieu of flowers, contributions may be made to:

In Lieu of Flowers Contributions May Be Made To: