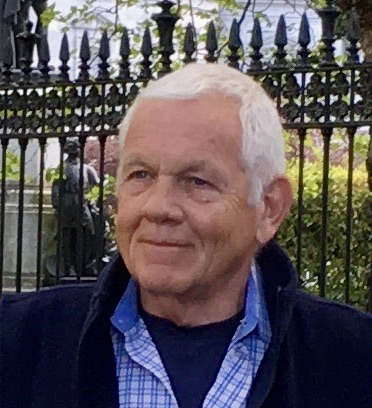 James Kevin Leyden, 71, of Yonkers, NY died at home on Monday, June 22, after a very brief battle with cancer. He went peacefully, surrounded by family and friends.

Jim was born in the Bronx, NY on May 2, 1949, to James and Margaret (McAneney) Leyden. He was a proud son of the South Bronx, where he was raised on 138th St. and Brook Avenue, alongside his sisters Ann (Leyden) Hayward and Pat (Leyden) Woods. He attended St. Luke School, Cardinal Hayes High School (Class of ’67), and Lehman College.

He served his country with the US Army on the Korean DMZ in 1967 and 1968, as well as in California, Colorado, and Georgia.

Jim was a devoted husband and a loving father. He and Pat (Hayden) Leyden, his beloved wife of 47 years, also from the Bronx, were married on February 17, 1973. They raised their two children in the Crestwood section of Yonkers, NY. He served his community quietly, through his many personal connections with friends and neighbors, who relished his one-on-one chats off to the side at parties and gatherings, and around the streets of the neighborhood.

Jimmy’s career was defined by his time with CBS Sports in the 1980s, and his work as a Teamster and Foreman at the Jacob Javits Convention Center in New York City. It was from there after September 11, 2001, that Jimmy and fellow teamsters commandeered a few forklifts, drove them down the West Side Highway, and joined the rescue effort on the pile at Ground Zero for several days.

Jim was a talented storyteller, a New York City history buff, and a fount of knowledge on a seemingly endless variety of topics. He had authenticity. He was tough, but kind. Brave, but humble. Gruff, but always loveable. A man of decency and conviction who was always shooting it straight. When he gave advice, he gave it with authority, and you knew you could trust him. When you earned his respect, you had it forever, and he would fight for you to the end.

Jim is survived by his wife Pat, his children Maggie and Michael, his sisters Ann and Pat, his brother-in-law Tom Hayward, who he considered the brother he never had, and his 7 nieces and nephews. He was a role model and an inspiration for many others, and he will be deeply missed.