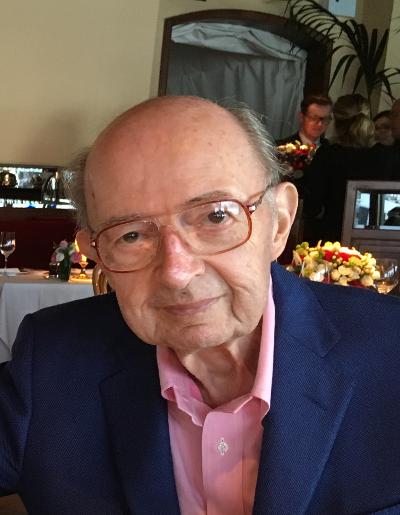 He was born on January 8, 1930, to Antoine and Julia (Behr) Elser. Raised in the Bronx in a strong Catholic tradition, John attended Cardinal Hayes High School and Manhattan College. After graduating from Fordham Law School, he served in the Korean War.

John married his sweetheart, Norma Fazia, in 1958. They moved from Woodlawn to Crestwood where they raised four children and found a strong sense of community as faithful parishioners of Annunciation Church. In Crestwood, John learned to play tennis, and the friends he made on the neighborhood courts remained constant throughout his life. His weekly game sparked a web of family connections and fond memories that endure to this day.

In his professional life, John co-founded the law firm Wilson, Elser, Moskowitz, Edelman and Dicker and was instrumental in its national and international expansion. He loved practicing law and the camaraderie of his colleagues. His work frequently brought him to Tokyo and London, cities that he greatly admired.

To his surprise, John thoroughly enjoyed retirement. He spent his newfound time at his favorite place, Lake George, and in Florida. He taught himself to cook, visited museums, and discovered the joys and frustrations of golf.  He and Norma moved to Bronxville in 2014 where he delighted in his daily rounds to the local shops.

John is predeceased by his sister, Vivian Creedon. He is survived by his sisters, Rose Marie and Eleanore Elser; his wife, Norma, with whom he shared 62 loving years; and his children Bernard, Elizabeth Sauerbrunn, Mara, and Diana LaRock (Brian).  He also leaves behind six grandchildren, Kyle, Chrissy, Will, Zachary, Zoe, and Eliza, of whom he was so proud. A friend to many, he will be dearly missed.

In lieu of flowers the family kindly requests contributions to Cardinal Hayes High School (www.cardinalhayes.org), The Parkinson’s Foundation (www.Parkinson.org), or the charity of your choice.

In Lieu of Flowers: Contributions may be made to Cardinal Hayes High School or to The Parkinson's Foundation