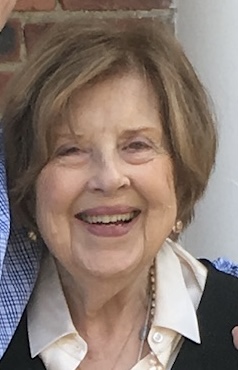 Born and raised in the Rogers Park section of Chicago. Wynn was a graduate of Mundelein  College. Wynn spoke proudly of her first job at the city’s Merchandise Mart. While there, her boss encouraged her to have dinner with a dashing young salesman who was visiting town. Six days later, Walter Camas proposed, and shortly thereafter, Wynn was whisked away to New York by the love of her life. After a short stay in Bronxville, Walter and Wynn discovered the tight-knit community of Crestwood… and another lifelong love affair began. Walter and Wynn not only survived but thrived in spite of their differences: Chicago Cubs vs. the Bronx Bombers, politics, appropriate gardening attire, to name a few. They were married for nearly 50 years and raised four children: Anne, Paul, Virginia “Ginny” and Walter. Family and faith were all-important to Wynn, which is why a home within walking distance to church – where the Angelus signaled both lunch and a call in to dinner, no matter where the kids were became part of the fabric of our lives.

Wynn was a mainstay at the 6:45 am mass at Annunciation Church, taught CCD for decades and volunteered for years with the Missionaries of Charity in the South Bronx. Wynn was a voracious reader (often juggling more than two books at once), a NY Times Crossword Puzzle fanatic and never turned down a game of cards (especially Bridge and Hearts). She loved to host or attend a party, listen to Frank Sinatra (while singing at the top of her lungs), see a Broadway show, enjoy late afternoons at the beach in Rehobeth with her life-long friends or attend a game at Shultz Field cheering on the kids. Family and friends were all she needed.

In lieu of flowers, donations would be gratefully received by the Friends of the Crestwood Library, 16 Thompson Street, Crestwood, NY 10707.

Or The Little Sisters of the Poor https://www.littlesistersofthepoorbronx.org/donate/

In Lieu of Flowers: donations would be gratefully received by the Friends of the Crestwood Library, 16 Thompson Street, Crestwood, NY 10707 Or The Little Sisters of the Poor