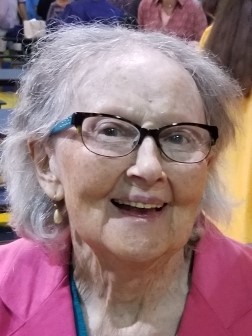 Bridget M. Broderick (“Bridie”) a 26-year resident of Bronxville, passed away peacefully at Lawrence Hospital, Bronxville, on October 14, 2020 – the birthday of her late brother Sean Moran of Patrickswell, Co. Limerick, Ireland and the one-year anniversary of the funeral of her sister Noreen Ahern of London, England, at which Bridie was in attendance.

In addition to Sean and Noreen, Bridie was predeceased by her husband of 50 years Benjamin Broderick, originally of Broadford, Co. Limerick, her son John Broderick of New York City and her brother Tom Moran of Clash, Athea, Co. Limerick.

Bridie is survived by her son William Broderick and her daughter-in-law Agnes Horvath Broderick, with whom she lived, her sister Teresa Dillon of London, nine grandchildren, and numerous cousins, nephews, nieces, grandnephews and grandnieces.

A proud daughter of Athea, Bridie graduated from Miss Woulfe’s School in Abbeyfeale, Co. Limerick, before relocating to London, where she trained as a nurse at Whipps Cross Hospital. After working for several years in London, Bridie immigrated to the United States, where she worked as a Registered Nurse in New York City. For the final 26 years of her career and until her retirement in 1994, Bridie worked at Montefiore Medical Center in the Bronx.

Bridie was a daily communicant and a parishioner of the Church of St. Joseph in Bronxville for over a quarter century. She attended her last Mass at St Joseph’s in March 2020, after which the Archdiocese of New York prohibited Catholics from attending Mass.

Bridie was devoted to her family, most especially to her husband, her sons and her grandchildren. In recent years, Bridie enjoyed her daily walks along Pondfield Road and around the Library in Bronxville. Her warm smile and gentle nature were appreciated and commented upon by all who knew and met her.