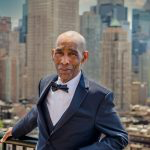 Mathurin “Augie” Augustin of Mount Vernon, NY by way of the Bronx, passed away peacefully on December 26,2021 at the age of 88. He was born on February 26,1933 in Micoud, St. Lucia to his parents Walter Augustin and Adelaide Dornelly.  He immigrated to the United States in the 1950s and married the love of his life Agnes in 1963. Augie and Agnes settled in New York and had their children. While in New York, Augie thrived in his career as a mechanic at Mendon Truck Leasing Company and invested in Real Estate in the Bronx, Westchester and in St. Lucia.  He retired from Mendon Truck Leasing Company after thirty years and without ever missing a day of work due to illness.

Mathurin was a devout Catholic and volunteered as an usher at St. Raymond’s Church in the Bronx for many decades where he was a parishioner. He was a proud St. Lucian who enjoyed visiting his beautiful island and dancing to calypso as well as country & western music.  He was known for supporting and uplifting his friends and family.

In his retirement years, he cherished spending time with family and his beloved wife of 58 years, traveling to Montreal, Canada to visit his extended family, taking his grandchildren to school, socializing at the Mount Vernon Senior Center and visiting his favorite casino, Empire City. Augie was known for sharing jokes and vivid stories about growing up in St.Lucia. Many of us know that he relished in hosting those infamous fetes in the basement of 1503 E. 172nd Street in the Bronx.  In addition to his wife, he is survived by his children, Marlene, Marsha, Merle, Walter and Matthew….his son-in laws Alvin and Vince…daughter-in-laws Millie and Christie and was preceded in death by his parents and his son, Myers. He is survived by his sister Theodora as well as brothers Robert, Ellinston and Ken. Augie is also survived by his grandchildren…Destiny, Devon,Pernell, Mya, Kevin, Riley, Kennedy, Zachary, Faith and numerous nieces, nephews, godchildren and an extended heartbroken family.

The family of Mathurin Augustin would like to extend our profound appreciation to everyone who reached out to us in prayer, generosity or by keeping us in your thoughts. Your kind words and gestures have helped us during our time of bereavement.

May God bless you all.