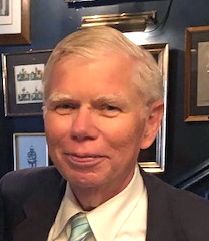 Dan Andrews passed away on October 12th, surrounded by his loving family.

Born and raised in the Chelsea neighborhood of Manhattan, Dan graduated from St. John’s University in Brooklyn in 1970 and launched a career in the news business as a photo caption writer at United Press International. It ultimately led him to a spot as UPI’s Bureau Chief in City Hall’s hallowed Room 9 press corps, covering Mayor Ed Koch.

Dan moved from Manhattan after getting married in 1973 and put down roots in Queens, where he raised his children and went on to serve for 23 distinguished years as press secretary to Borough Presidents Claire Shulman and Helen Marshall.  When he retired in 2013, the New York Daily News noted that Dan “may well be the longest serving government spokesperson in the city.”

Dan was an esteemed member of the Silurians Press Club, the NY Press Club and the Narrowbacks.  He loved his 30 plus years as part of the Inner Circle organization, serving as its program director for two decades.  He was also a proud Honorary Battalion Chief of the FDNY.

But more than anything, Dan was a kind and decent man of faith, and a beloved husband of 47 years to the love of his life, Deirdre, an incredible father to Jerry and Alison, loving father-in-law to Johannes and Maura, and doting “Pop-Pop” to Anna, Billy, Matthew and Catherine.

In remembrance of Dan, the family asks that any charitable donations be made to either St. Patrick’s Home for the Aged and Infirmed in the Bronx or the NY Firefighters Burn Center Foundation.