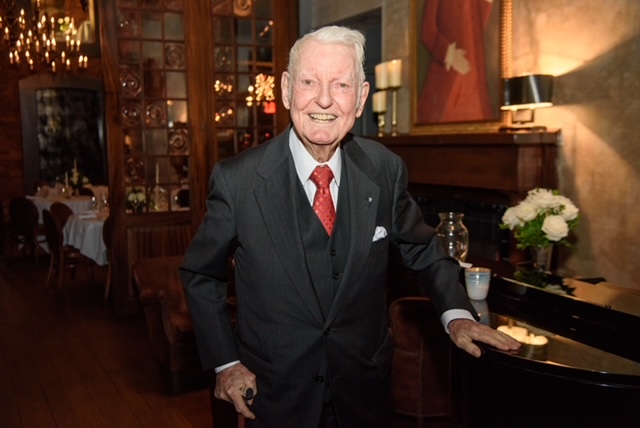 Francis Daniel Le Vert Coleman, of Crestwood New York, died peacefully at home, with his wife Ingeborg at his bedside, on Monday March 7, 2022 at the age of 94 and after a courageous battle with lung disease.

Daniel was born in Cologne, Germany on November 22, 1927, the only son of the late Colonel Le Vert and Catherine (Bruell) Coleman. He attended the University of Cologne and Columbia University Business School.

A resident of Crestwood New York since 1959, Daniel was an independent investor and financial advisor. He worked tirelessly until his death to build his stock portfolio to ensure the financial security of his extended family. In his leisure time he enjoyed lawn bowling, tennis, swimming, and traveled extensively with his wife Ingeborg. He greatly enjoyed, and contributed significantly, in leadership roles in many organizations including The Society of Colonial Wars, The Sons of the Revolution, The Veteran Corp of Artillery, The Sovereign Military Order of the Temple of Jerusalem, the Equestrian Order of the Holy Sepulchre, Annunciation Church, The Holy Name Society, The Taxpayer’s Association of Northeast Yonkers and The Princeton Club.

Daniel’s dedication to God and to the Catholic Church was remarkably strong. He often read his breviary and the Bible and studied the Catholic faith. He especially followed the teachings of Thomas Aquinas and was committed to seeking the proper interpretation and application of Christian ritual. Daniel’s dedication to God and the Church also showed itself through lifetime service to a number of religious organizations.

For over 50 years Daniel served in leadership roles at the Leo House, a not-for-profit Catholic guesthouse for travelers that historically gave European refugees their first welcome in the United States. Soon after being first elected to the Board of Directors in the 1960’s, Daniel convinced the Executive Director, Sister Florita, C.S.A. to set aside a modest amount of money to start an endowment fund to provide for “rainy days in the Leo House’s future” as he phrased it. He then started the Investment Committee and, as its Chairman, he built the fund into a portfolio. From that time until the first decade of this century he personally selected all of the investments. Mr. Coleman’s “rainy day fund” provided the financial security necessary for the Leo House to weather many storms including the COVID-19 pandemic. To quote the current President of the organization, “The Leo House would not exist today were it not for Mr. Coleman’s enormous amount of personal work hours of prudent financial stewardship”.

Daniel was a founding member of the Grand Priory of the United States of the Sovereign Military Order of the Temple of Jerusalem (SMOTJ), a Christian charitable and chivalric Order that seeks to protect Christians at risk in the Holy Land and throughout the world and to keep the road to Jerusalem open to all people of faith. He served as the 5th Grand Prior (national President) of the organization and chaired the Order’s Honorary Component known as the Order of Merit for over 40 years. Under his tutelage and leadership the organization has grown from under 100 members to over 1500 with chapters located throughout the country. To quote one of his fellow Grand Priors, he was far more than just a member of SMOTJ, he was the heart and soul of the organization for nearly 60 years.

As a member of Annunciation Church in Crestwood, Daniel regularly participated in the life of the parish, notably as a regular Lector during the Sunday liturgy and as a founder of the Holy Name Society.

In addition to his great love of God, Daniel also loved his country. He was a patriot and a direct descendant of patriots who helped found and defend the United States of America. He was inspired by this family legacy to serve in leadership roles in numerous organizations involved in historical preservation, research and education, including the Sons of the Revolution and Colonial Wars.

Daniel was a lifetime member, beginning in the 1960’s, of the Sons of the Revolution in the State of New York (SRNY), contributing greatly in his many roles including President, Vice President, Color Guard Member Secretary and Board Member. As one of its chief not-for-profit educational activities SRNY operates Fraunces Tavern Museum on Pearl Street in Lower Manhattan. Among the roles that Mr. Coleman most enjoyed was Chairman of the SRNY Color Guard which coordinates and leads the annual Flag Day parade down Broadway from City Hall to Fraunces Tavern each June 14. As SRNY president, one of Mr. Coleman’s many lasting achievements was the re-institution of the annual observance of Evacuation Day (November 25); the day in 1783 when the last remainder of all British military forces departed from the land of New York City.

Daniel also served the Society of Colonial Wars in the State of New York for close to 60 years, since 1963, in many leadership roles including: Gentleman of the Council, Officer of the Council, Patriotic Activities Committee Member, Society Historian and Registrar.

Daniel devoted many years of outstanding service to his community in Crestwood. Of note, he served the Taxpayers’ Organization of Northeast Yonkers over many years as President, Vice President and Chairman of the Board, helping to improve life in his community.

Since 1974 Daniel has been a member of Coveleigh Club in Rye, New York, where he delighted in participating in lawn bowling, especially when in 2004 he captained his team to first place and in 1995 when he received the Frank Lowe Senior Lawn Bowler Award.

Daniel’s greatest love and devotion, second only to his devotion to God, was to his beloved wife, Ingeborg Therese (Pfaff), from whom he was virtually inseparable for 69 happy years of marriage. Only death could part Daniel from his dearest Ingeborg, who survives him. Mr. Coleman is also survived by their son, Daniel Thomas Le Vert Coleman and daughter-in-law, Kathleen Lischko Hartford Coleman, as well as by their daughter, Eliza Augusta Coleman and son-in-law, Robert Pierro and by his grandchildren (who gave him great joy): Daniela Alessandra Pierro, Hewitt Daniel Coleman, Eleanor Conway Coleman Felten, and grandson-in-law, Richard Felten. He is also survived by cousins and family of his wife, Ingeborg, and his many close friends who will miss him very much.

A funeral mass will be celebrated on Monday, March 14, at 11 am at Annunciation Church; 470 Westchester Avenue, Crestwood, New York 10707. A live-stream link to the mass is available at http://www.mcgrathandson.com/obituary/Coleman-francis-daniel-le-vert/

Burial will take place at the All Souls Cemetery in Pleasantville, New York.

Services will be followed by a celebration of Daniel’s life in Bronxville.

In lieu of flowers, the family requests that donations be made to the Franciscan Foundation of the Holy Land at P.O. Box 29086, Washington DC, 20017-9086. The Foundation provides funding to preserve and maintain the Holy sites throughout the Holy Land, funds and staffs Christian schools and provides spiritual and physical care for the Christian population that continues to live and worship there.

In Lieu of Flowers: Contributions may be made to either:

The Sons of the Revolution in the State of New York